Quick! ... Someone tell me how to get to the LAN Uplinks Manager configuration page on Cisco UCS .. anyone, anyone? Yeah, it's a little hidden and you don't use it that often, but when you need to configure disjoint layer 2 in UCS, you need it.

Here's some quick and dirty notes on configuring Disjoint Layer 2 for Cisco UCS. 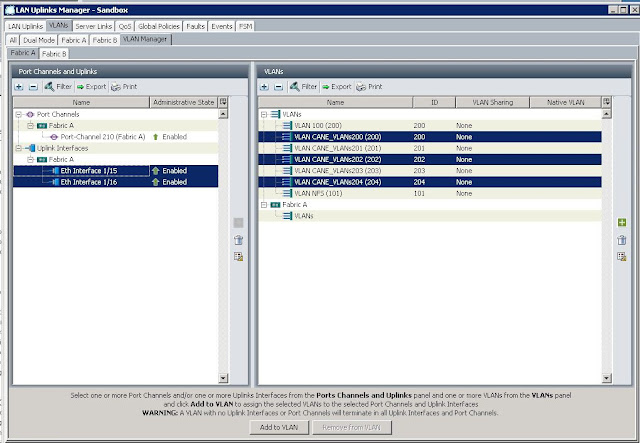 Posted by CiscoServerGeek at 11:00 AM 2 comments:

Geek-a-Palooza ... "Nerds Gone Wild" ... "The Nerd Herd" ... call it what you will. Every year around the end of August virtualization geeks from all over come home to roost at VMworld.

This year will be my 7th VMworld. The thing I enjoy most is seeing all the friends that I've made over the years in the industry. The company names may change, but the faces stay the same. This year I will be in the capacity of a #RovingReporter for Cisco along with @Josh_atwell, at the beck and call of @CommsNinja. I might have to get a beeper. If I call upon our friendship to put you on camera, don't be shy.

Every year I have the best intentions of staying on track with my sessions and meetings, but then starting day 1, it's wheels off. I believe that's the best way to experience VMworld. Let the winds flow you in what directions they may. You'll meet many interesting people and your conversations may bleed into a session you wanted to attend. Don't worry, every session is recorded and you can watch when you get back home. Use the time to make the connections, and do hands on labs!

There are many chances to connect with Cisco at VMworld. Come visit me at the booth, hit me up on twitter, or VMworld Socialcast and share a story on camera. One other tip, when you meet someone make sure to use your twitter name and have it on your badge.  Twitter has become the defacto standard for connecting and the conference and most of us have met via that channel.  Usually when I meet someone I recognize from twitter in meat-space for the first time, I say "Hello, I'm Scott Hanson, nice to meet you in person." Then I get this blank stare and I know, "Ohhh, they only know me as a tiny avatar and a twitter ID ... I should have worn my orange t-shirt"

If this is your 1st or 8th VMworld, I'd love to say hello if we haven't met. Here's my rough schedule for the week, but as I said, the winds blow :-) 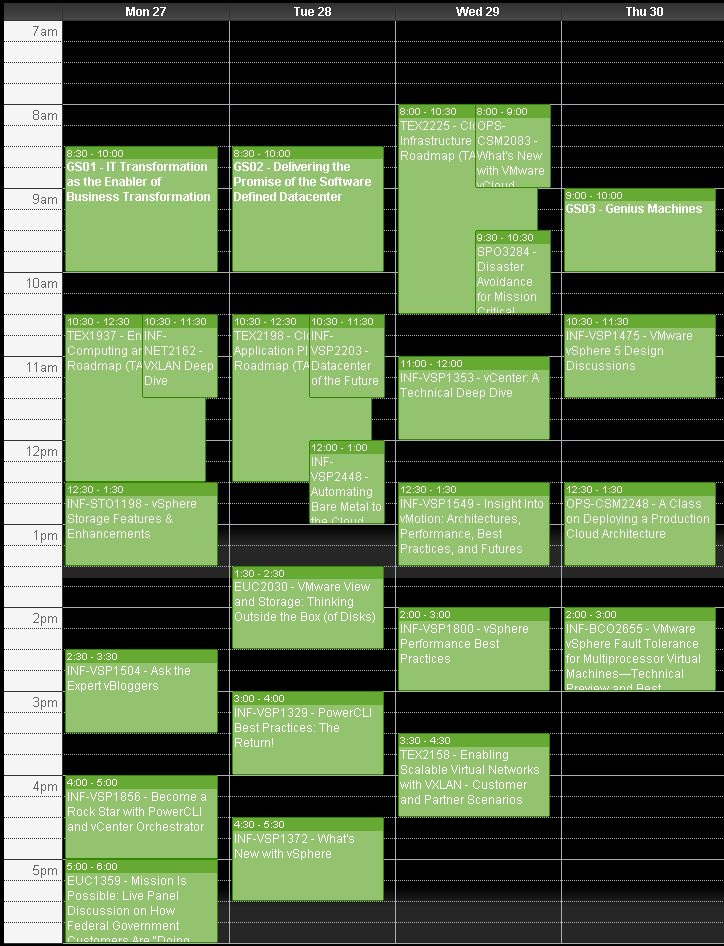 Stay hydrated, wear comfortable shoes, and SMILE ! It's over quicker than you think.

Posted by CiscoServerGeek at 1:04 AM No comments:

When I say Acknowledge - you ACKNOWLEDGE me ok? Ohh wait, I just rebooted ?

This has come up twice in the past few weeks. I decided to put a little something down in writing to help clarify Maintenance Policies in Cisco UCS and why it might not be working the way you think it should.

I believe the confusion starts in that we've all been doing server updates the same way for a LONG time.  You update the system through your method of choice (ISO, floppy, software tool, etc) then you reboot the server and it's running the new firmware code.

I like to say that the "S" in UCS does NOT stand for "Server", it stands for "System". When you're updating Cisco UCS there's a few more things going on under the covers.  First, every compute node (server) under control of Cisco is under the ever watchful eye of the Fabric Interconnects. In order to make these changes, the servers in UCS boot from the FIs and load what is called PNuOS.  You might have seen this scroll by when you first configure a Service Profile on a system.

The "Processor Node Utility OS" is what controls the server.  It parses the XML of the Service Profile and makes the changes.

When you make any change to a server under UCS that is disruptive, say for instance a FW update, it says, "OK, I hear what you're saying to me, but I'm going to look to my Maintenance Policy first and get back to you on when I'll actually perform the change you asked."

The default maintenance policy is "immediate" ... yucky, don't ask me, I didn't make it the default. Most people change to at least a "User-Acknowledged" policy.  Which means do the change when I acknowledge it at some later time.  At this point you should be saying, "So Scott, there's actually two sides to the UCS system ... one where it's under my control, and the other where it's under the FI overlord's control?" Correct. Until you actually acknowledge the changes, the system will never flip the bit in the service profile to make it boot from PNuOS.  If you simply reboot the system, it's still just a regular server and will perform a regular server reboot, never booting from PNuOS, but simply doing what you told it as a regular server.

Now when you make a change and have a User-Ack maintenance policy, you'll get a pop up that looks like this:

To acknowledge the action, you have to Acknowledge it in the pending activities.
﻿ ﻿Clear as mud, which is maybe clearer than it was before. Or you could just create one uber service profile template with Immediate as the maintenance policy and activate all changes from there .... wait .. hmmm no, that's not really a good idea. :-)

Posted by CiscoServerGeek at 5:48 PM No comments: